The Basics:  John Russell was born January 3, 1921 in Los Angeles, California.  He was raised in a family with four other children, two sisters and two brothers, all of whom survived him.  He attended  the University of California where he was both a drama student and a student athlete.  In 1942, he joined the Marine Corps where he received a battlefield commission and was decorated for valor at Guadalcanal.  In 1943, he married his first wife Renata.  [The marriage would last over twenty years.]  He  was honorably discharged from the Corps  in 1944.  In 1945, he was "discovered" by an agent in a Beverly Hills restaurant which led to roles in  a number of B-movies [see credits list], generally as a villain or secondary lead.

In 1955-1956, he costarred in the syndicated half-hour series Soldiers of Fortune with Chick Chandler. 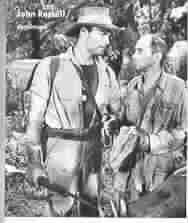 John played the handsome lead, Tim Kelly, adventurer for hire.  Chandler played his humorous sidekick Toubo Smith through the series 52 episodes.  Although the series was set in a constantly changing series of exotic locations, it was strictly a backlot production.

After Soldier of Fortune, John did several other movies and guest appearances in series like Maverick, Cheyenne, Sugarfoot, prior to being signed to star in Lawman as the taciturn, highly moral, unbending Marshal Dan Troop.

In 1957, John was first-billed as the villain in Hellbound in which he co-starred with June Blair and Stuart Whitman.  He came to a suitably bad end in a shipyard where he hid from the law.  But he did get to kiss a couple of girls which was a couple more than he kissed in Lawman.

On January 12, 1958, the Maverick episode "Rage for Vengeance" aired costarring John Russell and Catherine McLeod.  John played a cattleman driving the "sodbusters" out of Montana.

In the Cheyenne episode "The Empty Gun", John played a character more like Dan Troop in appearance, speech patterns and persona than any he had previously played.   Matt Reardon, a reformed gunfighter with a  crippled gun hand [psychosomatic from distaste for killing we are led to believe], needs Cheyenne's help to deliver $6000 to his former lover, the wife of his former partner.  Her son hates him for killing his father.   Matt's a man of honor who never actually wanted to be a gunfighter.  He was forced into the gunfight that killed his partner and only then realized how good he was with a gun.   In the end, he lets the son draw on him.  Although mortally wounded, he convinces the boy he wasn't shot at all.  He doesn't want the boy to know he's killed someone because that's what made it easier for he himself to kill a second time.

According to the mini-bio in Television Western Players of the Fifties, by Everett Aaker,  it was the role in "The Empty Gun" that inspired Warners to create a series in which John would be "the embodiment of law and order."  Given the marked similarities between Dan Troop and Matt Reardon, this is certainly a plausible scenario.  Another interesting thing about "The Empty Gun" is that, following the Warners pattern of recycling scripts, this episode was later made into the Lawman episode "The Payment" [5-8-60] with John playing the Cheyenne protector role and Robert McQueeny playing the reformed gunfighter.

John's last guest appearance to air prior to the debut of Lawman was in the Maverick episode "Lonesome Reunion" [9-28-58]  There was nothing heroic about him in that episode. 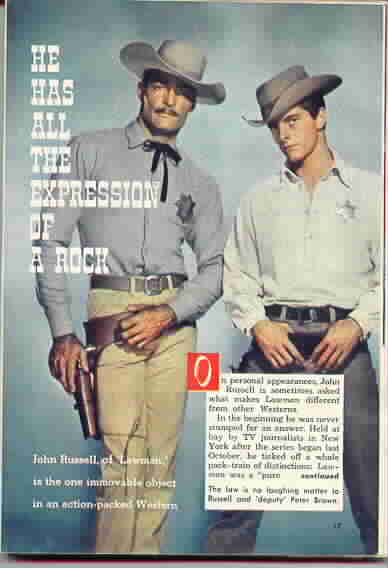 Asked at the 1998 Charlotte Film Festival about his best recollections of Lawman, Peter Brown answered, "John Russell, John Russell, John Russell.  He was about as good as it got."   At the 1998 Knoxville Film Festival, Peter described how John Russell took him under his wing and taught him how to act in front of a camera.   Thus life imitated art.  The format of the show called for Marshal Troop to be mentor to his young, inexperienced deputy.  [In one aspect life didn't imitate art-- Peter was actually the better gun handler of the two although John was no slouch.] 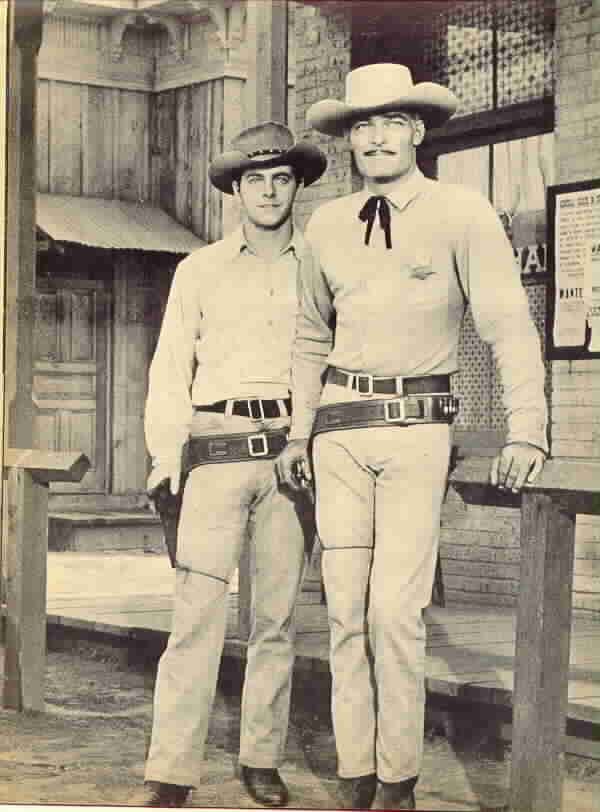 Apparently John  not only took his young costar under his wing, but enlisted him in a "conspiracy" to make Lawman a quality show despite the fact that at the time Warners was pumping out Western and detective shows like sausages from a meatpacking plant.  They had to contend with hectic schedules, skinflint budgets and a myriad of writers and directors who were never given the time or money they got at other studios.  The two stars, along with the producer Jules Schermer were the constants who maintained the high quality of the show and the consistency of the characters.  Schermer complained that break-neck production schedules meant that directors had no time to take into account any of the subtleties of the script, including characterization.  Apparently Russell and Brown both understood Schermer's perspective:  "The success of the TV drama depended on establishing a particular tone.  A television episode, he explained, 'is basically only an incident built up with characterization. If a director plays the characterization wrong . . . the total effect of the teleplay is destroyed.'" [from Hollywood, The Studio System in the Fifties, "Reviving the Studio System at Warner Bros. Television.]   The standardized production at Warners left the actors as the only important elements in a series to distinguish one from another.  Russell and Brown with Schermer, managed to keep that strong characterization, including an interesting and growing relationship between the two main characters in Lawman. 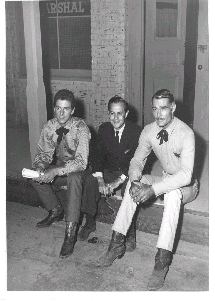 During the four-year run of Lawman, John was only allowed to appear on two big-screen features.  Yellowstone Kelly was a typical Warners feature using it's contract players, in this case Clint Walker had the lead, Edd Byrnes played the young secondary lead and John Russell played an honorable Indian.  (Men with great cheekbones seemed to be called upon to play Indians a lot until people in casting came to the realization that there were real native Americans available for the parts.)  We would have loved to have seen Peter in the secondary lead instead of Byrnes.  He certainly would have brought more authenticity to the role. 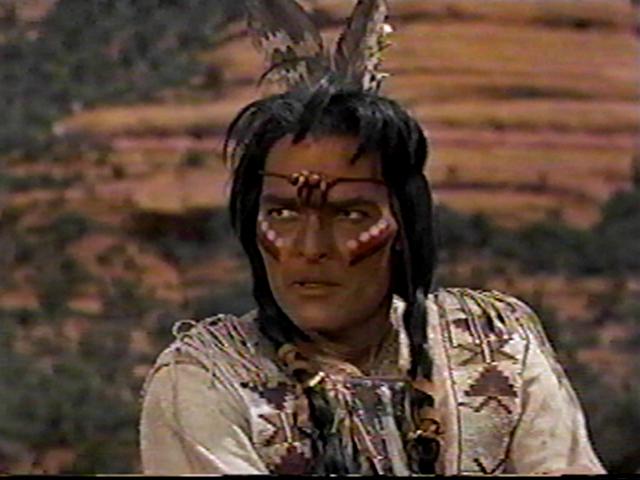 John has two big scenes and one smaller appearance at the end.  First he confronts Dude at the entrance to town where he's making everyone leave their guns.

John's second main scene is at the jail where he visits his brother and confronts Chance and Stumpy. 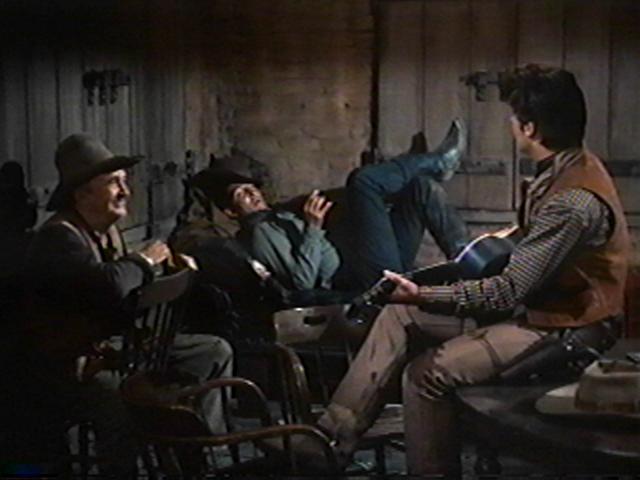 One of the highlights of Rio Bravo is a duet between Martin and Nelson and a second song in which Walter Brennan joins.  [Given Warners prediliction for casting as many of its own contract players as possible in its projects we'll bet it was Peter's inability to sing that kept him from the Ricky Nelson part.  As we are always interested in the action scenes, we note that Peter would have brought much more to the gun handling scenes as he was much faster than Nelson.]

John's last appearance is the final confrontation but he's mainly a background figure as he sends out a hostage and eventually gives up.