Although promotional merchandising wasn't as sophisticated as it is today, many 1950s and 1960s series had something to offer with the actors' pictures on it. Lawman had its share of tie-ins, including lunch boxes, boots, cap pistols, puzzles, sheet music, etc. Below is a small sample. There are probably things we don't know about (but would like to).


Peter Brown's fellow former Warner Brothers contract player Edd Byrnes (Kookie on 77 Sunset Strip)commented in a 1997 interview (Psychotronic Video) "What you've got the remember about Warner Brothers is that everything was geared to sell. . . . If it helped to sell a Warner Brothers product, you did it. We were always doing photos and going out with starlets." Many Warners stars cut records including Will Hutchins (Sugarfoot), Clint Walker (Cheyenne), Roger Smith (77 Sunset Strip), Troy Donahue (Surfside 6), Connie Stevens (Hawaiian Eye) and Dorothy Provine (Alaskans, Roaring Twenties). Edd Byrnes, who couldn't sing at all, "talked' his part in the Connie Steven's hit "Kookie, Kookie, Lend Me Your Comb."

At a collectors show one of our NiteOwls commented facetiously to Peter that he must have a truly awful voice if Warners didn't get him into an echo chamber to record an album. Peter reckoned as to how his voice might not be the greatest but he did have a recording. He sang Winter Wonderland on the Warners Christmas album. 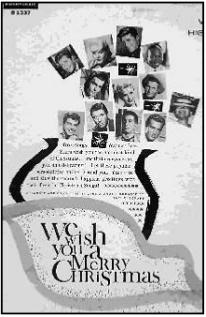 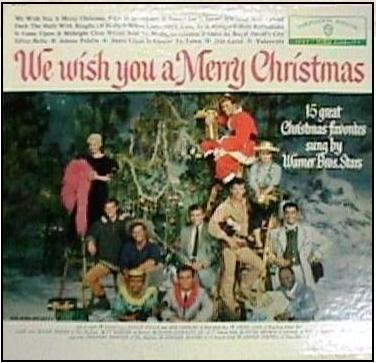 Singing on the album along with Peter are Warners stars like Dorothy Provine, Roger Moore, Ty Hardin, Poncie Ponce,
Robert Conrad, Efrem Zimbalist Jr., Eddie Cole, Ray Danton, Connie Stevens, Edd Byrnes and Clint Walker
(pictured on back only) who may have been in the midst of his contract dispute when the front picture was shot.

Peter was probably a little over his head, musically speaking, in this crowd. A few of the stars regularly sang, in character, on their shows. Dorothy Provine's numbers were the highlight of the Roaring Twenties and The Alaskans. Connie Stevens and Poncie Ponce regularly did numbers on Hawaiian Eye. Some of the other stars like Efrem Zimbalist Jr. had serious music backgrounds. So what's the verdict on Peter's voice? Well, he stuck to a song suitable for a limited range and had a female chorus to sing the more difficult parts. His voice was quite pleasant, given those limits, definitely notches above Edd Byrnes, who talked his way thru "Yulesville." 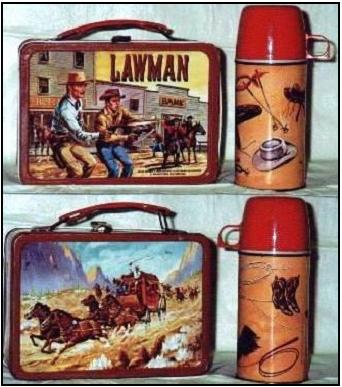 John Russell and Peter Brown were shown
in character on both sides of the Lawman
lunch box. The thermos did double duty
for Lawman and Wagon Train. 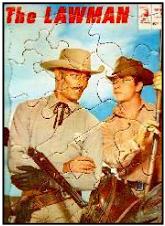 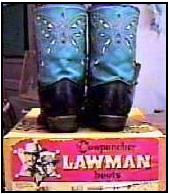 Marshall Troop and Deputy McKay are pictured on the box.

Many western tv stars had their pictures on these cards which were somewhat larger than standard playing cards. They came in playing card suits and full pictures in several colors.

Not So Affordable Stuff

If you want to know more about any of the Hartland western television character figures, check out Mike Jackson's site at www.cowboyparts.com. The pictures above came from his site and he has lots more including Cheyenne, Maverick, Rifleman, Wyatt Earp, Roy Rogers, etc. According to the site info. the Johnny McKay figure is the rarest of the gunfighter series which explains why they now sell for up to $1000 depending on condition. The last one we saw on eBay went for $816. A few years ago, a Dan Troop (in the box) went for almost $900. Unfortunately, no one in our group ever saved one from childhood. (Actually most of the women in our group collected the horses as girls, not the human figures which included sports figures and others marketed mostly to boys.) 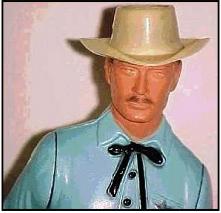 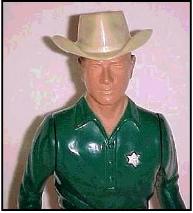 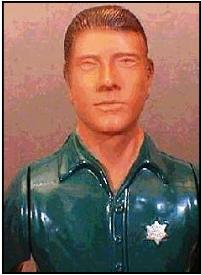 According to Mike, the McKay figure is probably the rarest because it wasn't very popular. We think maybe that could be because it looks very little like Peter Brown and is wearing clothes nothing like the ones Peter wore in Lawman. He never wore a black hat or a green shirt on the show. (We know--the show was black and white but the comics have color pictures.) And unlike Cheyenne, he doesn't have a horse. Some of the figures sold on eBay, like those below, have him in a cream hat but according to Mike those hats tended to get switched around a lot when people had more than one figure. Until we saw Mike's site, we would have passed one up if we'd seen it at a garage sale because we wouldn't have guessed it was supposed to be our favorite deputy.

A Lawman rifle in great condition with an intact box and cover is a rare find. When we added the one pictured below to the page, the eBay auction was still active. The sellers reserve was $200. 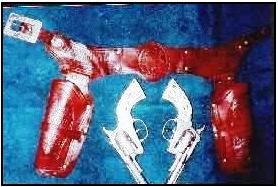 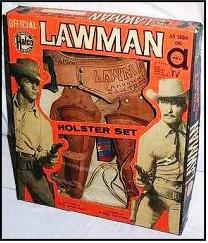 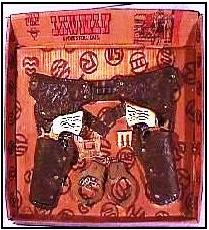 These cap pistols are
still in the Lawman box
with the handcuffs.

These cap pistols were sold on eBay as
"Dan Troop Pistols" for over $300.

This set of holsters in the box (no guns) was up for auction on eBay with a reserve of almost $400. 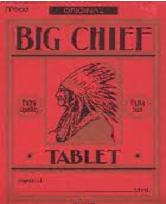